Volunteers are at the heart of the success of the Nevada Diabetes Association’s programs. Each month the NDA will spotlight a volunteer for exemplary service through the presentation of the “Emerald of Excellence” Award. Congratulations to Tandy Mcgee for being the recipient of this award for February! Thank you for your dedication to the NDA!
Tandy has been living with type one diabetes for almost 44 years. When she was nineteen years old, her endocrinologist asked her to volunteer as a counselor at a new camp for diabetes. She struggled with her diabetes for years and did not like the thought of being part of anything that sounded like a “support group.” The doctor was persistent about her participation, and she eventually agreed to it just to get out of his office and thought she could cancel later on. She didn’t cancel and this was her first year at the camp known now as Camp Buck! Tandy loves being a part of the core medical staff and co-director of the CIT program for youth leaders. She started the CIT program in her early years at camp and it fills her with pride to see some of those first CITs running the whole camp, and the NDA now! Her most memorable experience at camp was when an eight year old camper, Megan, looked up at her on the first day of camp and asked, “Do you have diabetes too?” This was a life-changing moment for Tandy. It was the moment that she began thinking about diabetes differently and decided to pursue a degree in nursing and become a certified diabetes care and education specialist.
Thank you Tandy for being an exemplary volunteer.

Q1: Please share one fun fact about yourself and how you became involved with the NDA.
Fun Fact:  I’ve had type 1 diabetes for almost 44 years.
Involved with NDA:  When I was about 19, having struggled with my diabetes for years, my endocrinologist asked me to volunteer as a counselor at a new camp for diabetes in its second year. I had experience working with kids, but I was absolutely against going to anything that looked or sounded like a “support group.” I hated diabetes and was happy ignoring it. He kept trying to talk me into it, and eventually I said yes, just to get out of his office. I figured I would cancel later and it wouldn’t matter. When the organization called to confirm, I tried to back out but they begged me to come, and eventually I gave in. That year was my first year at what later became Camp Buck.
Q2 : What is your favorite part about being a member of the Medical Staff at camp and an NDA volunteer?
I love being part of two teams at camp—I’m a member of the core medical staff, and co-director of the Counselor-In-Training program for youth leaders. I love working with new med staff members and teaching them camp protocols, helping them deepen their understanding of diabetes in children and teens, and all the little moments at camp among the med team when we share our experiences and learn from one another. I love teenagers and enjoy helping them develop their leadership potential. I started the CIT program in my early years at camp, and it gives me such pride to see some of those first CITs running the whole camp and NDA show now!
Q3:  Briefly share one of your memorable experiences at camp.
My most memorable camp experience, and one that changed the trajectory of my life, was when my 8 year old camper, Megan, looked up at me on the first day and asked “Do you have diabetes too?” That was the moment that things changed for me. When I left camp, I was thinking about diabetes differently. I went on a pump and got myself together, and I changed my major from psychology to nursing and became a certified diabetes care and education specialist. 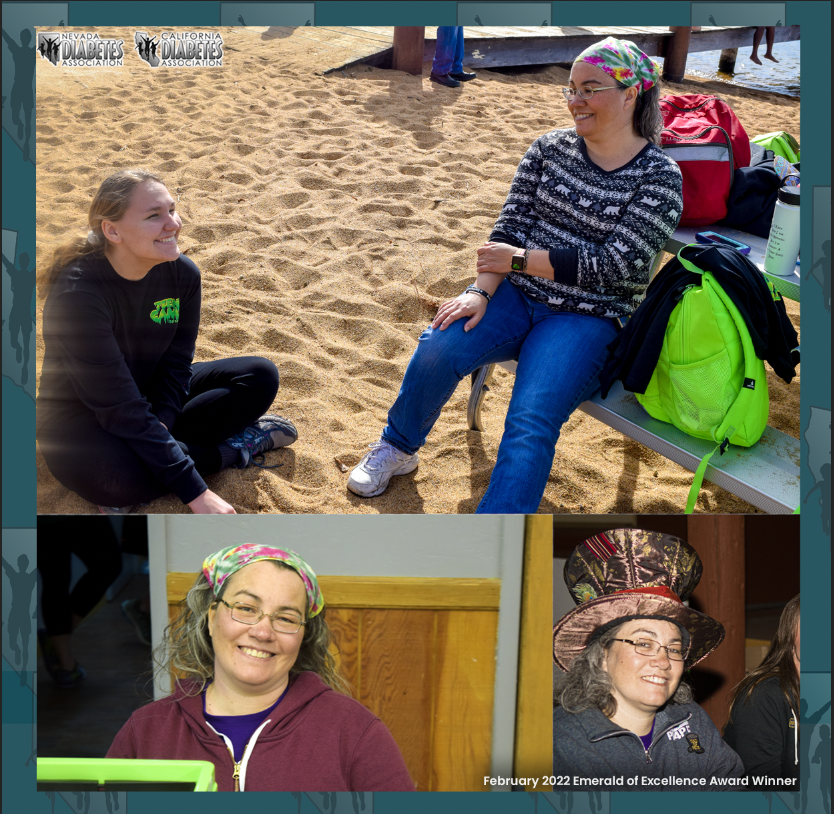