We want to improve the lives of people with diabetes through prevention, education and service. We offer camps, diabetes support programs, seminars, workshops, printed materials, electronic resources, emergency diabetes medical assistance and advocacy. We have been thriving for over 30 years to help people affected by diabetes live longer, fuller lives by avoiding complications that this disease can cause.

Until there is a cure, we are here to help! 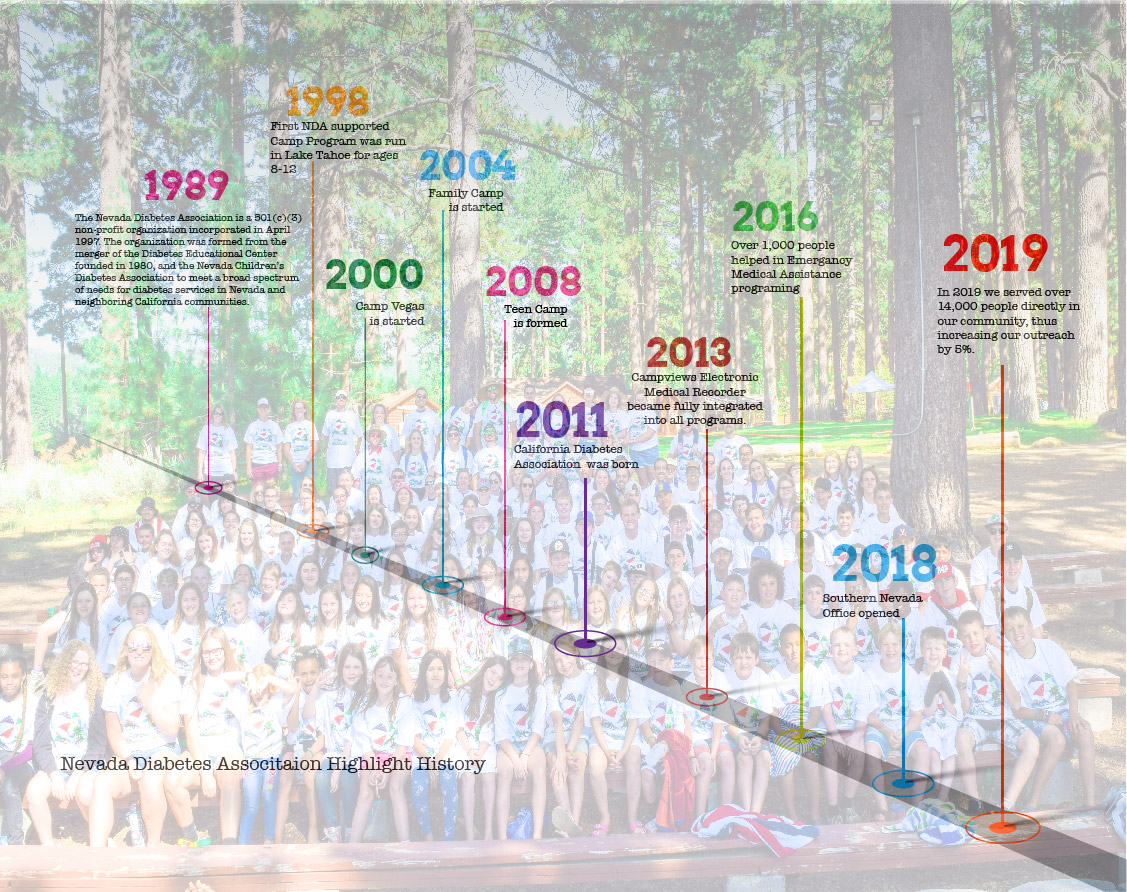 In 1998, the NDA supported one camp program for children with diabetes, ages 8 to 12, in Lake Tahoe. We now have two week- long resident camps, a weekend family camp, a weekend teen camp, a family support, and free family education programs. The programs help teach children how to cope with living with diabetes, educates them to become self-sufficient in managing their condition, and instills confidence in their self-management. These programs also help families learn important skills, which in turn, successfully helps their child. It also relieves many concerns parents have about raising a child with a chronic and potentially life-threatening condition.

In 2000, the NDA received a grant from the State of Nevada Diabetes Control Program to develop a Nevada Diabetes Resource Directory and Guidelines for Children with Diabetes in School. The Resource Directory and Guidelines are updated annually to keep information and resources current. This was also the year that we established Camp Vegas, our 2nd resident camp program. The NDA is also a part of the CDC’s “Diabetes Today Training Program” and utilizes this resource to develop community based programs for the prevention and detection of diabetes. The “Defeat Diabetes Project” is an example of the type of program that creates partnerships to meet the goal of reducing the burden of diabetes in our communities and state. “Defeat Diabetes” partners included the NDA, HAWC Clinic, Nevada Hispanic Services, Reno Host Lions Club, Saint Mary’s and the Washoe County District Health Department. The project targets the Hispanic Community as well as other high risk and at-risk populations through providing information, educational handouts and free diabetes screenings. The protocol for this program has been made available to and has been duplicated by other organizations throughout the state.

In 2001, the NDA became a licensed site for the Stanford Chronic Disease Self-Management Program. This training provided the NDA with the ability to facilitate the program in Nevada and train leaders for the program. Two-day Camp Programs were also established in 2001, one in Reno and one in Las Vegas. Grants from the State of Nevada Diabetes Control Program to the NDA brought the “Lighten-Up” program from the Medical School of South Carolina to meet the needs of the African American community. This program uses faith-based principles along with health messages to reduce the risk of diabetes, heart disease and strokes, and help those who may have these conditions to avoid complications.
In May of 2002, the NDA established a regional Board of Directors, an office in Clark County, and took over support of the DCAF (Diabetes in Children and Families) Support Group. The NDA supports an annual DCAF Health Fair, Summer Family Picnic and Holiday Party. During the same year, the organization received a grant from the State of Nevada Tobacco funds to facilitate the Chronic Disease Self-Management Program statewide for a two year period. Twenty-one teams were trained and licensed to offer the program at various sites throughout the state.
Since 2002, the NDA has grown its programs to include the “Small Changes Big Rewards” program, “Eye of the Eagle” program and “Surviving the Holidays.” These programs are made available to businesses, organizations and individuals free of charge. These programs have enabled the NDA to establish numerous partnerships across the state and further reduce the incidence of diabetes and its complications in both adults and children. The “Eye of the Eagle” program was the first program developed by a non-profit from Nevada to be selected for presentation at the 2006 CDC Diabetes Translation Conference.

In 2004 the Terry Lee Wells Family Camp was created.

In 2006 we brought the management of our camp programs in house and hired a Director of Camps.

In 2007, the NDA expanded staffing to include an Executive Director for our Southern Nevada office. These additions to our staff enable the organization to closely manage and oversee the programs we offer.

In 2008 the NDA implemented a teen camp program sponsored in part by the Reno Rodeo Foundation and the Injection Connection program for teens in Southern Nevada. The Savvy Patient Program was also started as a pilot program for adults dealing with diabetes and other chronic health conditions. Camp Manager was created to move our registration systems to a completely electronic format for pre-camp, camp, and post camp use.
In 2010 planning began for a Teen Injection Connection in Reno, explored partnership opportunities to address Diabetes Peripheral Neuropathy, and provided an ongoing adult diabetes support and education program at a local Adult Residence Center.

In 2011 the Northern Nevada Injection Connection was established. A partnership with Pfizer Inc. created a program to address DPN. In addition, the NDA established under its 501(c)3 registration, a nonprofit corporation in California. Thus, the California Diabetes Association was created. The NDA maintains its internet presence and is part of the global community providing information on diabetes resources and referrals.

In 2012 we expanded our camp programs to include three new camps in California, in addition to increasing our community partnerships for the expansion of seminars and programs for providers.

In 2013 we received the Helmsley Charitable Trust Capacity Building Grant to establish a fully functional mobile camp operation. Camp Manager, our inhouse electronic medical recorder, was renamed to CampViews. This system became fully integrated into all NDA/ CDA camp programs.
In 2014 a Director of Programs was added to expand the Emergency Medical Assistance programming and the clinical seminar series.
In 2016 we helped over 1000 people in emergency medical support in one year. Over 1400 nursing students attended our Diabetes 1:1 Introduction Medical Education Communication series with our university partners.

In 2017 all camp programs exceeded capacity and camp facilities were moved to accommodate the expansion. The NDA introduced the “Betes-Box” to newly diagnosed families. The “Betes-Box”is given to a family after diagnosis. It is filled with a lifetime of support for anyone affected by the diagnosis. We established partnerships with DOLC and Save Mart pharmacies to directly support the aid of the Emergency Medical Assistance Program distribution.

In 2018 we celebrated the opening of the Southern Nevada office. We reached over 90 days of programming, established integration with Dexcom (Continuous Glucose Monitoring System) at all of our camp programs and on CampViews, presented at the United Nations on the community impact of diabetes camps, and participated in the Summerlin Patriotic Parade on the 4th of July.

In 2019 we served over 14,000 people directly in our community, thus increasing our outreach by 5%. We established the DKA support group (Diabetics Kinda Adulting) for young adults. The focus of the group is to encourage this age group to return to a health continuum of care routine. The CampViews platform was leased out with the intent to increase best practices in all diabetes camps. We ran our first CGM study which showed that campers that used advanced technologies at camp stay in range and out of hyper and hypo glycemic dangers. We hired a Director of Media to help with our community awareness and virtual programming.

In 2020 we purchased our long term leased building in Reno on 18 Stewart Street. We began a Guardian Program to help assist with the community renovations on this project. The goal of this project is to expand our direct services by 25% after the renovation. We hit a benchmark on social media with over 292,000 impressions on Facebook within one year and over 430 posts. We presented on our successful Diabetes Camp/ Continuous Glucose Study to both ATTD and ADA.

In 2012 the Diabetes Society in Santa Clara closed its doors. The Nevada Diabetes Association had a long standing partnership with the Diabetes Society as they administered all of the camp programs until 2007. With this hole for desperately needed diabetes camp programs, we formed the California Diabetes Association to help ease the burden. We were able to appeal and raise funds to keep these camps running with the assistance of former Santa Clara staff. We were pleased to find out that there was overwhelming support and the impact is crucial and led to our expansion.

With partnerships in several states, we are able to offer the community a place where children with diabetes are able to learn the most important life skills and take charge of their health. This allows everyone to become a part of a community and understand the complexities of this chronic condition.

We now offer several programs in California, and will continue the momentum with expansion in mental health support, Veteran’s affairs, technology advancements and beyond.